I’ve been corresponding with Michael Laiskonis, Le Bernardin’s executive pastry chef, for over a year. I found him through his blog, where he explains his approach and techniques with unusual eloquence. There are other pastry chefs with James Beard awards and three Michelin stars, but Chef Laiskonis is the first I’ve encountered with a combination of great vision, deep technical curiosity, and the ability to speak easily about both. Like many creative titans, and all of my friends, Chef Laiskonis is a poor judge of character; he invited me to work in his kitchen in spite of my obvious lack of credentials and housbreaking.

Such a rare opportunity demands preparation, which in my case consisted of a full week chanting, “don’t knock anything over.” I’ve had a chance to study Chef Eric Ripert’s book, On The Line, which details everything backstage at Le Bernardin, including the 10 by 14 foot pastry kitchen that cages up to six pastry chefs and production people, who craft individual pre-desserts, desserts, tasting menus, and petits fours for up to 300 guests a night. The possibilities of elbowing a chef in the eye, stepping into a bucket of glucose, or capsizing an entire speed rack of tuilles and spherized pear nectar seemed almost infinite. Happily, the training worked; drama seekers will have to wait a little longer for posts about self-inflicted palette knife wounds or kitchen evacuations.

The greatest barrier between the average schmo and the kitchens of Le Bernardin may not be their standards but their architecture. Finding the kitchen required trips up and down different stairwells, U-turns through basement catacombs, and conflicting directions from a cook and an elevator repairman. I thought of the scene in Spinal Tap, where the band wanders the bowels of the venue in search of the stage. At one point Maguy Le Coze, co-owner and co-founder of the restaurant, stormed past me in a subterranean passageway before pushing through an unmarked door. She looked appropriately sleek, intense, and French; as one would expect, she didn’t look up at the hapless stranger wandering the stairs.

When the kitchen doors finally appeared around a corner, it was only a matter of minutes before I’d been introduced to the crew and handed a chef jacket and propane torch. There was some mention of a tour, which never materialized (when I got home, 12 hours later, I realized that I never even saw the bathroom). Instead, production went into full swing. It was a slow night; the restaurant was somewhere around half capacity, but still every guest gets a pre-dessert, a dessert and a plate of petits fours*, and at least one table had arranged for a special dessert tasting menu.

I spent most of my day working on the petits fours, which consisted of a round financier with pistachio and a macerated cherry in the middle, a chocolate cup filled with praline cream and sprinkled with ground toasted almonds, a beignet, and a wafer of white chocolate topped with a duo of gummy cubes (mango, and … something red). My accuracy on some of the ingredients may be off; I only nibbled on broken ones and that was during the tunnel vision of production and assembly. While the plate of petits fours comprises 4 bites, there are actually 10 components, each of which has to be prepared separately, sometimes in several steps, before final plating. The morning production crew had already prepared many of the ingredients and components for us to assemble. By the time you pop one of these scooby snacks in your mouth, it’s probably been worked on by five or six people over the course of many hours.

The work requires some precision, but perhaps not as much as I’d first assumed. Ricardo, the sous chef, would typically show me one example and then cut me loose to do the rest. In my effort to perfectly duplicate his, I occasionally resorted to using tweezers where he’d used a plastic spoon. I loosened up a bit when I saw him laughing at me.

We cranked out the fours in waves, stopping when we ran out of plates, starting up again when a fresh stack came back from the dishwashers. I spent much of my downtime observing others plate the main desserts—a skill I would like to acquire, and one I’m ecstatic that I didn’t have to fake in that setting. Every dessert has multiple components, some of which are delicate tuiles or disks or other brittle constructions. The saucing is a mix of geometric precision and loose brushwork and squeeze-bottle painting. The overall effect conveys sophistication and a bit of playfulness, and remarkably avoids the over-constructed, self conscious displays that were in vogue in the 90s (and never quite went away). I have philosophical issues with some kinds of saucing (like small dots of sauce, or piles or smears of dry powder), but when Chef Laiskonis uses these techniques he does so with restraint and to such great esthetic effect that I found myself wanting to steal some of his designs.

I spent some downtime watching the hot kitchen. Compared with some high end kitchens I’ve seen, Le Bernardin’s is austere; it’s about as small as imaginable for the size of the brigade (slightly smaller, actually … the canapé station is a pair of wheeled carts with portable burners, tied to the end of the pass). The equipment is all solid and immaculate, but traditional and decidedly un-fancy. I saw no hint of induction hobs, anti-griddles, or rows of chefs plating microgreens with surgical tweezers. It looks like a restaurant, in the most traditional sense.

The hot kitchen feels like a war room compared with the pastry kitchen’s operating room calm. All the cooks I watched handled the onslaught easily. There were no losses of control or focus or communication; everyone performed like a rock star. The sauté station in particular stood out. I have doubts if my wee brain could handle such simultaneous demand for volume, spontaneous organization, and perfection.

Back in the pastry kitchen, I handled some miscellaneous jobs like unmolding frozen goat cheese hemispheres (which would then be spherized in sodium alginate), and unmolding and cutting to size small logs of corn custard that had been formed with various hydrocolloids. Whenever I found Chef Laiskonis taking a break from running the ship, I pestered him with questions, on everything from his opinions on the Michel Cluizel chocolate varieties they use, to ice cream theory, to the finer points of reverse-spherification of fruit purées. His loyal lieutenants, Ricardo and Jesus, were able to shut me up a few times over the course of the evening by handing me a beautifully plated dessert and a plastic spoon. Of course, after indulging in such a creation I only had more to talk about. There are maxims about keeping one’s eyes open and mouth shut; alas, there are also compulsions that keep one’s life interesting while keeping one mostly unemployable.

One unexpected surprise was Chef Ripert’s visit to the pastry kitchen. He was as gracious and charming in person as he is on television; he seemed like a boss who wants to create an environment where his workers feel comfortable and motivated to do their best work. I don’t know how many chefs of his caliber spend as much time as he does in the kitchen … I suspect not many. I didn’t see him micromanage, but I saw him observe, and check in many times with the heads of various teams. When introducing us, Chef Laiskonis said, “Paul’s been stalking me for about a year now.” Chef Ripert replied, “I understand. I had to stalk Michael for two years to get him to come here.”

Our final plates went out around 11:30 pm. We had already cleaned up most of the pastry kitchen; an easy task compared with the near-demolition going on next door on the hot side. Six pastry technicians making tiny sculptures just don’t make the same scale mess as forty pirates slinging a thousand pounds of fish through a million BTUs of fire. And the line cooks are denied the most rewarding cleanup task of all, which fell into my hands: putting away the ice creams and sorbets. I first knew Chef Laiskonis as a long-distance ice cream guru. Having my hands on all dozen flavors of his daily stockpile felt like some kind of industrial espionage (except, of course, that I am without anything resembling an industry). I came away with two flavors I’d like to shamelessly ape (crème fraîche sorbet and praline citrus ice cream) and a much more rounded sense of what my guru’s up to.

We said our goodbyes after Chef led me through the catacombs and back to the real world. I don’t think I expressed enough gratitude to Ricardo and Jesus for their patience and friendliness in the kitchen; they helped make a potentially nerve-wracking experience both comfortable and educational.

I may have an opportunity to do a similar stage on the hot side of the kitchen … stay tuned!

* literally “small oven” … these confections were invented in 18th century France as a way to take advantage of residual heat in the coal ovens at the end of the night. Thanks to the modern convection oven, we can now work on them all f’ing day. 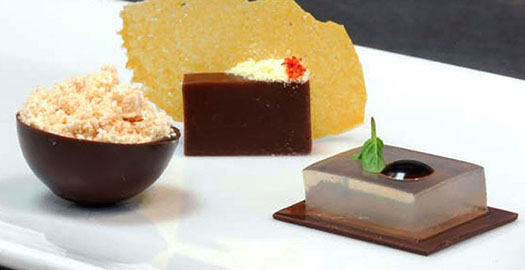 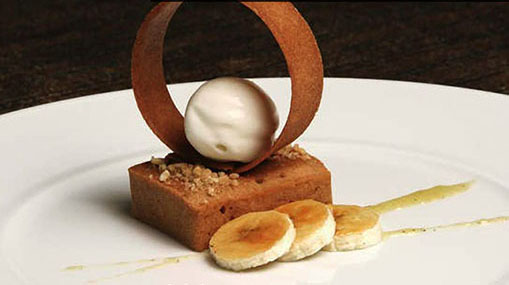 Typical dessert platings. Stolen off the restaurant website; I didn’t want to get in the way with my camera.

Leave a Reply to Son of Food Cancel reply