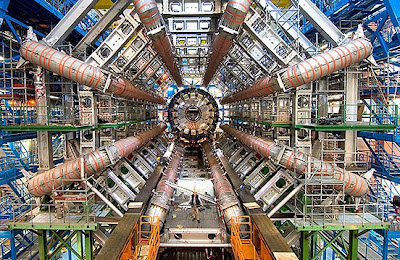 If you’re like me, you’ve been thinking, “immersion circulators and antigriddles were cool back in the ’90s … but what I really want is a large hadron collider.”

Because, after all, with the particle physicists’ recent world record of smashing two protons head on, each charged with 1.2 trillion electron volts of energy, you could really work some magic in the kitchen.

Well, not so fast. I just calculated that roasting a single 4lb chicken requires on the order of 1.3 X 1024 electron volts. In other words, you’d need almost 2 trillion proton collisions to cook the bird. It’s also unclear if the chicken would succumb to any undesireable quantum effects (like being blown, literally, into next week. Or last week).

I’m checking with friends at Alinea and Fermilab right now, but it’s starting to seem somewhat less practical than an oven. Stay tuned.