Skip to main content
There are many takes on thanksgiving dinner. One is about nostalgia: cremate a Butterball turkey, whisk lumps of flour into the the fatty pan drippings, cut open cans of translucent cranberry substance, add water to the stovetop stuffing, and finish off your loved ones with a wrecking ball of mashed potatoes. Bury them under pie.
Another approach is elite, postmodern: set the immersion circulators, disassemble the turkey, cook bird parts separately sous vide for varying numbers of days, reasemble with enzymes, hydrocolloids, or classical galantine or ballantine configurations, as layers, confits, forcemeats, or entirely new creations, brown in gallons of frying oil, or with a roofing torch, or with lasers …
We attempted the middle path: turkey that looks like a turkey, but tastes strangely … good.
Guided by the belief that good turkey starts with a good turkey, I procured an 18 lb heritage breed free range bird from Bo Bo poultry, through our master butcher and minor celebrity Jeffrey Ruhalter. Judging from her eyes, she might have been walking around as early as Wednesday morning. Judging from her hand-sized tallons, which, thanks to Jeffrey’s packing job were hanging out of the top of the shopping bag, she might have been somebody’s landlord or ex.
The Chinese passengers on the J train smiled in approval while everyone one else cleared a path.
I salted her and left her loosely covered in the fridge for 24 hours. Then sewed her up with some stuffing made from mixed wild mushrooms browned in duck fat, homemade duck and pork sausage, toasted almonds, and dried cherries.
I cooked her using a range of techniques I’ve been refining over the years. The first step I learned from chef Georges Perrier from Le Bec Fin in Philadelphia: poach the bird before roasting. Very gentle, moist heat, in a flavorful court bouillon does wonderful things for poultry. After this, I pulled her out of the pot (no trickier than rescuing a fat friend from a boiling lake), dried her, brushed her with garlic-infused butter, and put a bit of that under the breast skin.
The next step is key: bard the breast meat. White meat is ideal at 147F at most; the dark meat likes three to five degrees more than this, and is harder to reach with the heat. Barding is the old practice of covering the bird in fat before spit roasting; smart chefs learned to selectively bard the breasts. I used a latice of Niman Ranch bacon, followed by a triple layer of foil. The bird went in a shallow roasting pan on top of a bed of onions and her own head and feet. The oven was cranked to 500F. After half the roasting time the barding comes off, so the breasts get browned and crisped. A propane torch touches up any unevenness.
Mahogany brown, buttery juicy goodness, nothing dried out, none of that god-awful wateriness that gets sold as juiciness by the church of brining. What’s most striking about this kind of bird is the white meat: it’s not just moist and well textured, but flavorful. It tastes bright, herbal. Friends who’ve claimed that white meat lies below unseasoned tofu on the evolutionary ladder have fought over breasts of a well-cooked Bo Bo.
I’m a whore for sauce, so I did a lot of whoring. I started with a duck coulis, made by simmering multiple immersions of browned duck leg and mirepoix vegetables in veal stock, gradually adding more stock as it reduced. My 6 cups of stock gave me just over 2 cups of coulis, which had much more depth and three dimentional flavor than any traditional demi-glace. I bound it very lightly with a gram of xanthan gum. The duck meat and fat went into the stuffing. On game day, I deglazed the roasting pan drippings with madeira and cognac, reduced with some parsley, and strained this into the coulis. No added cream or butter … the consistency was a perfect light syrup, and even though it was defatted it gave a real impression of richness—but without any dairy to mute the flavors. This is one of the nicest sauces I’ve ever made, and I’m delighted there are still a few spoonfuls in the fridge.
We also had roasted butternut squash and garlic soup, sautéed rainbow chard, cranberry and Grand Marnier relish, a fantastic salad made by my girlfriend with produce she ran over straight from the Park Slope food coop, Peter Reinhart’s insanely great and impossible-to-improve-upon bacon and buttermilk cornbread, and a puree of fennel and sunchokes. I’m sad to report that this last item, thrown together at the last minute when I couldn’t find any celeriac, tasted a bit like something I’d imagine coming out of a baby bottle. But the guests lapped it up and even asked for seconds. What can I say? The small dollop of leftovers will be used to spackle the bathroom. I’m reconsidering the future of sunchokes in my kitchen.
For dessert I made an apple tart with multiple layers of paper thin apple slices, bound by a spiced apple puree heavy on calvados and cardamom. This has become my favorite tart invention. I served it with some homemade cognac ice cream. We also had a delicious concoction called a Nantucket pie, brought by a family friend … kind of like a financier embedded with fresh cranberries, served with a dollop of chantilly cream.
I had a great time fussing around the kitchen for this, and then eating and drinking and drinking some more with my friends. For anyone interested in the turkey technique, it’s posted here. 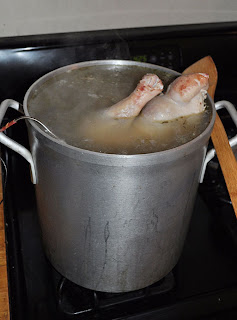 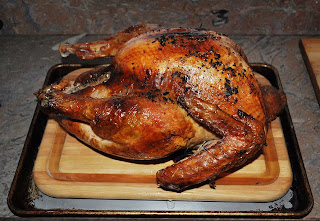 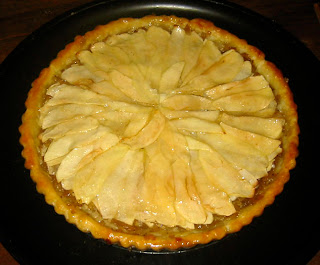