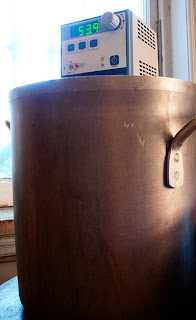 the Mothership
I wanted to do a test run before inviting the world to our long-promised steakhouse night. In addition, friends have been begging for something good to eat, and my girlfriend is skipping town for the greener pastures and sensory delights of … Rwanda. So it was last weekend or never.
I enlisted our close collaborator and butcher Jeffrey Ruhalter to procure some primer-than-prime, 8-week dry aged steaks. We went mostly with tail-end t-bones, which are essentially shell steaks, and one rib-eye, just for fun (actually, it was at Jeffrey’s insistance … “you and I will eat the rib-eye,” he said). But in the chaos of plating, I have no idea who got the rib-eye.
Cooking perfect steaks for sixteen guests, with no crew and four burners, is beyond my art. So I borrowed a laboratory grade sous-vide immersion circulator from our good friends at A Razor, A Shiny Knife. A couple of test runs helped determine our final method:
We salted and peppered the steaks and bagged them with cultured butter; cooked them sous vide for 2-1/2 hours at 54°C; dried them, and brushed with a solution of glucose and sodium bicarbonate (to speed the maillard reactions that give a crisp, brown crust); seared on a hot griddle for about 45 seconds per side; sliced across the grain and served on hot plates.
Thanks to the ruthless precision of the sous-vide Mothership, the meat was perfect. Imagine a sous chef who never falters, never gets tired, and never talks. You get the idea: true love. Returning her to her rightful owner may have broken my heart forever.
The rest of the menu was merely made by hand. It included a cucumber gazpacho with mint and smoked salmon (an idea pilfered from Daniel Boulud), and financier cake served with raspberry-thyme sorbet and bit of cognac whipped cream. We served the steak on a bed of Israeli cous-cous made with wild mushrooms; sauteed baby bok choy with garlic; and a brown sauce made from a very intensely flavored beef coulis, mushrooms, and sage.
The coulis took two days to prepare, starting with a simple stock made from roasted beef and veal bones, and then a slow reduction with multiple immersions of meat, herbs, and aromatic vegetables. The coulis became a sauce shortly before serving, with the addition of shallots and reduced wine, mushroom duxelles and mushroom cooking liquid, sage, and a bit of arrowroot starch and xanthan gum to adjust the texture. There was no fat or dairy to mute the flavors, although the texture was similar to a butter-finished sauce.
Wine was BYO, and friends brought impressive quantities of delicious ones, including a Barberra that I tried to hoard between coarses.
Good times! The meat was spectacular—as good as any I’ve ever had—deeply beefy with all the funky, nutty, and minerally aged flavors you’d hope for from 8 weeks of dry age. It was extremely tender. I’m not sure if the 2-1/2 hours of slow cooking increased the tenderness, but I’d advise against going longer than this with these cuts; you’d risk the meat becoming too tender, if you can imagine such a thing.
For our upcoming (eventually) public steak night, we’re going to go one better, and have Jeffrey procure beef from three of the best farms in the country. Right now we’re looking at Four Story Hill Farm, Prather Ranch, Brandt Beef, Snake River Farms, and Hearst Ranch. All have different raising and feeding philosophies and reputations for extremely high quality. We’d like to put their offerings side-by-side on the plate for our guests to sample.
Stay tuned! In the mean time, to get your hands on beef like what we’re showing here, go talk to Jeffrey at the Essex Street Market. You have two choices in New York: get it from Jeffrey, or go uptown to Lobel’s and pay four times as much (no exaggeration).
For advice on cooking great steaks, check out our recipes here.
This dinner was made possible by generous support from
the Levy-Dangerscissors Corporation ™ and its worldwide partners. 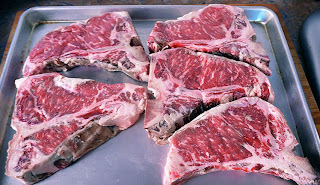 The t-bones and shell steaks 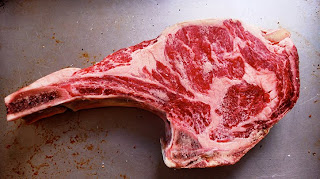 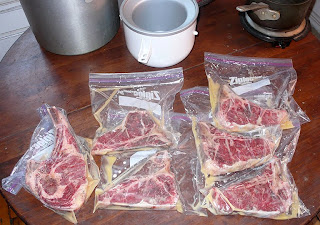 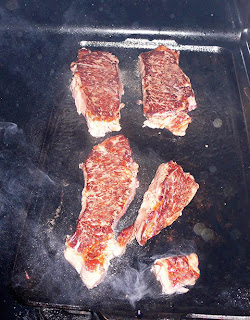 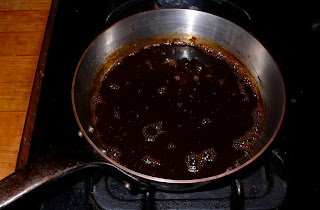 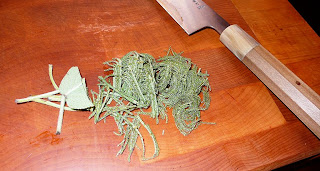 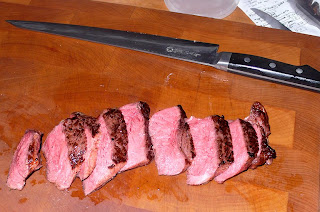 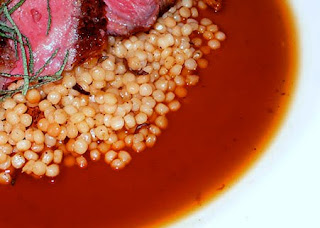 a little overindulgence in the saucing?